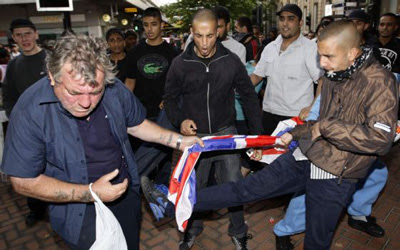 An excellent article at FrontPageMag from one of the GatesofVienna bloggers.  Yes, it is heartbreaking to see this once powerful #1 nation of the world going the way of the cavemen.  At the same time, you can't help but feel scorn for the wimps known as Englishmen. How could they let this happen?

This pic is from the ROP website titled "Not everyone in Britain seems ready to embrace dhimmitude. Here, an older Englishman tries to hang onto his flag even as his country slips away. "


When I arrived in London in September it had been more than forty years since I had last spent any time in the city. If I hadn’t kept up with recent events through my British contacts, the changes would have been startling indeed.

The most popular tourist spots appear much the same, and the commercial areas are still thronged with shoppers. No matter where you go, however, the presence of Islam makes itself felt. With the rapid increase in the Muslim population over the past decade, the capital of Britain has moved that much closer to becoming an Islamic city.

The process of Islamization is not always as obvious as in this poster, which appeared one morning last July at a bus shelter on the corner of Mission Grove and Carisbrooke Road, in the Waltham Forest area of East London...................
Posted by MariaS at 11:49