Nepalese Dorje Gurung, working in Qatar as a chemistry teacher, released from prison ....


after international pressure to free him. 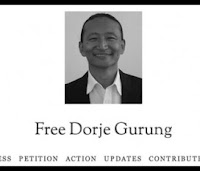 Let this tale be a cautionary one for non-Muslims who rush headlong to the Middle East because they value monetary gains more than integrity.  These same people always think that bad stuff won't happen to them because highly delusional that they are, they think the Middle East and the Muslims there have become educated enough to live in the 21st century.  How wrong that is proven to be millions of times!

Maybe Mr.Gurung watched a few episodes of  the Doha Debates  with that delusional misleading Brit as a moderator and all those smart and intelligent looking Qataris coming up with interesting questions and liberal opinions thought to himself:  "How well educated the Qataris have become!  What a nice progressive nation!  Not like a Muslim country at all!  I must put in my application to further enlighten those smart Muslim kids in Qatar."

Thank your stars Mr. Gurung that someone started the petition to free you and someone in the Qatari govt.  thought it was wise to do so.  There are too many tales of "ignorant about Islam and Muslims" folks like you who are still languishing in jails and many who have lost their lives because of their foolishness.

From DohaNews:
....According to several colleagues of Gurung’s,  he had a history of problems with certain students who did not respect his authority, in part because of his nationality.
The conflict came to a head last month during an argument with three 12-year-old boys in the school cafeteria, in which they taunted him and poked him, Gurung told friends. In response to the teasing, he said something to the effect of, how would you like to be stereotyped, ie called a terrorist?
Within days, the teacher was fired and jailed.
Gurung’s arrest mobilized friends, colleagues and supporters from around the world, who over the weekend gathered some 13,000 signatures in an online petition demanding his release.
It has also sparked questions among educators in Qatar about whether they will face similar repercussions for disciplining students.....