Another huge scandal in the USA .... this time it's the Republicans

This should give the Democrats a breather. Sarah Palin should cut all ties with the obnoxious warmonger John McCain otherwise she will lose the rest of her  fans.  What McCain has done and has been doing is clear indication that the idiots in the USA, especially the Republicans,  know nothing about the taqiyyah masters they are dealing with and will believe anything from anybody because their brains are curdled either with old age or lack of intelligence.   The person who looks the most intelligent from the entire bing bang in their government is   ......Barack Hussein Obama .... and you just don't know how much it pains me to admit that.  Tell the truth, shame the devil .... that's my motto.

From AlAkhbar English:
The Obama administration said on Tuesday  it knew in advance of a trip to Syria by John McCain, a visit that raised questions over whether the Republican senator met with the kidnappers of a group of Lebanese pilgrims held hostage for the past year.

US officials had little to say about the trip by McCain, an outspoken advocate for US military aid to the rebels fighting President Bashar al-Assad. 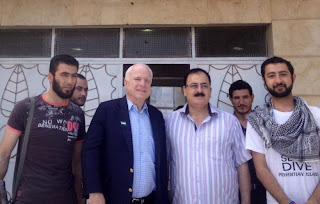 McCain's office said his visit was organized by the Syrian Emergency Task Force (SETF), a non-profit group that backs the Syrian opposition and is based in the United States. The Republican senator crossed into northern Syria from the country's border with Turkey on Monday and stayed there several hours in a surprise visit.

McCain saw General Salim Idris, the leader of the Supreme Military Council of the Free Syrian Army coalition of rebel groups, as well as 18 commanders of Free Syrian Army battalions from all of Syria, the SETF website said.

"While meeting with Senator McCain, General Idris and FSA commanders asked that the United States increase its aid to the Free Syrian Army in the form of heavy weapons, a no-fly zone, and air strikes on Hezbollah," the SETF website said, referring to the Lebanese resistance group backing Assad.

However, a report aired on Lebanese al-Jadeed television identified two of the rebels who met with McCain.

The report by Nawal Berri said that two men seen in pictures with McCain were Abou Youssef and Mohammed Nour, whom she had met last year when al-Jadeed visited the 11 Lebanese hostages last year. The two men had been in charge of escorting the television crew last summer.

A group of Lebanese pilgrims were kidnapped in May 2012, and pushes for the release of the remaining 11 have so far been unsuccessful.

President Barack Obama has repeatedly shied away from US involvement in the conflict, which has claimed 80,000 lives according to United Nations estimates, although he has kept all options on the table. The Obama administration has sent food and medical supplies to Assad's opponents.

"We were aware, of course, that Senator McCain was going to make this trip," White House spokesman Jay Carney said. "And we look forward to speaking with Senator McCain upon his return to learn more about the trip."..........