An interview with Syria's "rebels" .... the headchoppers that the USA and UK are supplying arms to

Aren't they lovely and loverly?!   Lots more groovy stuff  on the future plans for  Syria at the link..... and thanks to the USA, France, UK, Saudi Arabia and Qatar to name just the first few,  the plans will come to fruition.

From TheEconomist:
......The interviewee is a young fighter from Jabhat al-Nusra, an extremist Sunni group in Syria affiliated with al-Qaeda in Iraq. A former teacher and then tiler, he is dressed in well-ironed black trousers, a white shirt and a black turban. A gun rests on his lap. He is accompanied by an older man, who appears to be judging him on his answers. Both are Syrian and ask not to be named because they do not have permission to speak to the press. 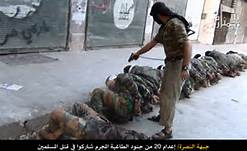 How has Jabhat al-Nusra become so powerful?

The reason is the weakening of the other groups. Jabhat al-Nusra gets the advantage because of our ideology. We are not just rebels; we are doing something we believe in. We are not just fighting against tyranny; Bashar Assad is only part of our fight. The other groups are only a reaction to the regime, whereas we are fighting for a vision.

What is that vision?

We are fighting to apply what Allah said to the Prophet Muhammad, peace be upon him. We are fighting so people don’t look to other people but only to Allah. We don’t believe in complete freedom: it is restricted by Allah’s laws. Allah created us and he knows what is best for us. 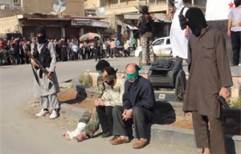 What future do you see for Syria—or do you even see a Syria in the future?

We want the future that Islam commands. Not a country with borders but an umma [worldwide Islamic community of believers] of all the Muslim people. All Muslims should be united.

Syria has long been known for its sectarian diversity. How do you view the other sects?

The other sects are protected by the Islamic state. Muhammad, peace be upon him, had a Jewish neighbour, for example, and he was always good to him.  But the power and authority must be with the believers [Sunnis], not the unbelievers.

What about other Sunnis who are more moderate than you?

We will apply sharia law to them.

Allah knows what will happen to them. There is a difference between the basic kuffar [infidels] and those who converted from Islam. If the latter, we must punish them. Alawites are included. Even Sunnis who want democracy are kuffar as are all Shia. It’s not about who is loyal and who isn’t to the regime; it’s about their religion. Sharia says there can be no punishment of the innocent and there must be punishment of the bad; that’s what we follow. 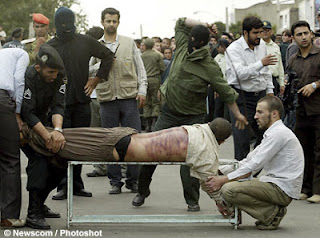 Did you lose or gain fighters following the announcement that you are linked to al-Qaeda in Iraq?


We’re with anything that represents real Islam, whether al-Qaeda or otherwise. If there is a better group, we’ll go with them instead. The effect of the announcement is that now we know our friends and our enemies. The good people will come to our side and the bad people will leave.

Many, maybe most, Syrians do not share your views. Do you care?

It would be great if the Syrians were with us but the kuffar are not important. Abraham and Sarah were facing all the infidels, for example, but they were doing the right thing. The number with us doesn’t matter.

Which other rebel groups do you see as acceptable? Ahrar al-Sham, another Salafist group, criticised your links to al-Qaeda.

I think only 5% of the battalions are against the Islamic vision. Ahrar al-Sham are a mixture of Islamists and people who like Allah so we are not sure about their vision. We are very clear as the Prophet, peace be upon him, made it very clear to us. Other groups have good beliefs but we are the only committed ones.

Will the differences lead to clashes, as have happened in some places? And how would you react if Western powers decide to arm other rebel groups?

If the arms reach people who will fight Assad and Hizbullah that’s okay. If they use them against us, then that’s a problem. We’ll avoid fighting [other groups] if we can. The West wants to ruin Syria.

How hard is it to become a member of Jabhat al-Nusra?

We examine those who want to join. First you must be loyal to the idea of Jabhat al-Nusra. Second, you must get a recommendation [from someone in the organisation]. Third, you go to a camp to be educated and practice, and take the oath of loyalty to the emir [the group’s leader]. 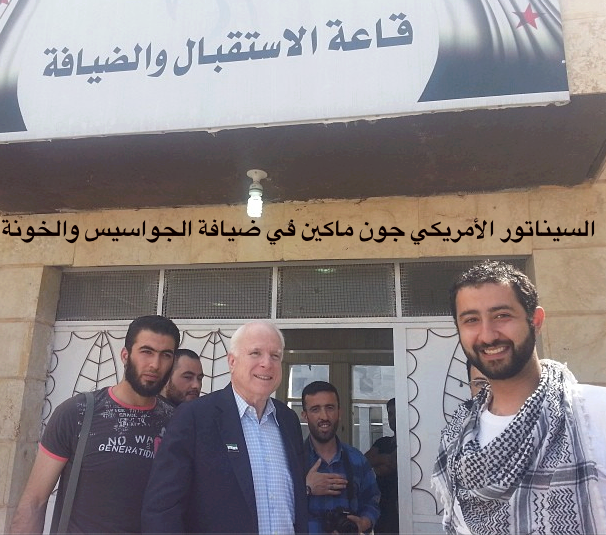 Do you plan to carry out operations against the West in the future?
There is no permanent friendship and no permanent enemy. We’ll do whatever is in the interest of Muslims. The first duty on us is to fight the kuffar among us here in the occupied Muslim lands. The next duty will be decided later...........