The vampiric blood-thirst of George Soros ... 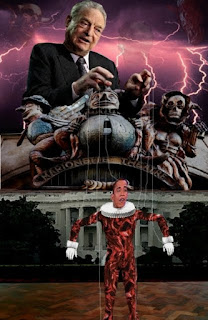 for endless amounts of money will never end unless a stake is driven into his heart and he is buried six feet under. The man is one of the main puppet masters of the universe, the universe as we know it today is largely in his hands. He is the epitome of those evil characters you see in movies where maddish morons want to hold the world in the palm of their right hand, while they destroy mankind with the ultimate WMD they are holding in their left hand. This is the man responsible for the introduction of hedge funds which have been responsible for the total distruction of many a company. His strategy is simple. If a CEO of any organization defies the rules as set down by Soros, he will use his "hedge powers" on the company's stock and manipulate the hedges in such a way that within a very short time the stock is kissing dust on the trading floor. The organization and it's BOD are then putty in Soros's evil hands.

His tactics are let loose on all whom he perceives to be defying him, as befits and becomes any of the moronic madhatters shown in movies. However, Soros's tricks are played on real human beings and not for the benefit of the arts.
A few weeks ago, the gold market had a severe fall back and for a few days only those close to the nexus of such things knew the reason why.


During the World Economic Forum in Davos in late January, Mr Soros said: "When interest rates are low we have conditions for asset bubbles to develop, and they are developing at the moment. The ultimate asset bubble is gold."

While investors starting selling their gold holdings on this new bubble fear, guess who started buying truckloads of the stuff at decreased prices? Yes, you guessed right. Soros. Not just Soros, someone in China has also been increasing their holdings in gold and the usual suspect is the Chinese govt itself. The world is controlled by a few crooked individuals and regulations put in place to keep ordinary folks like us honest, will never mean anything to these powerful entities. Soros knows that inflation is on the rise and so he wants to increase his gold holdings but why  would he ever think of going about it in an honest way when  he has the power to pull strings every which way he wants to?  He is a manipulator and so he manipulates to get what he wants at a price that he is willing to pay and damn the consequences.

And to think that it is Soros that holds the strings to the supposedly most powerful man on earth !!  It's a nightmare unfolding right before our eyes.
Posted by MariaS at 13:27