Jump Obama Jump ...how high can you go?

Wanna bet that Obama will now take affirmative action against Iran or sanction Israel to do it on his behalf ? His masters from Saudi Arabia are sending him a crystal clear signal and Obama will rush headlong to follow their wishes.

RIYADH, Saudi Arabia – Saudi Arabia's foreign minister on Monday expressed doubts about the usefulness of more sanctions on Iran over its nuclear program. 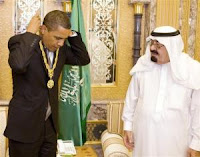 Prince Saud al-Faisal told a news conference in the Saudi capital that the threat posed by Iran's nuclear ambitions demands a more immediate solution than sanctions. He described sanctions as a long-term solution, and he said the threat is more pressing.....

...."Sanctions are a long-term solution," the Saudi minister said. "But we see the issue in the shorter term because we are closer to the threat," referring to Iran. "We need immediate resolution rather than gradual resolution."....  via: Matt Drudge read on
Posted by MariaS at 13:02