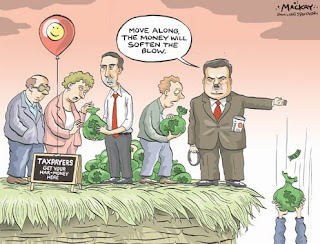 Hey .. how about that!  Even bosom pals like Gerard Kennedy are now dumping on the Premier's pet projects. That's what Lefty friends are for, right?! They love screwing everybody, including their own kind. I wonder how many more will come out and say "We never thought he should have spent on that" or "We always thought that project was too ambitious" or "We told him to cool it with the spending but he wouldn't listen". Mark my words, it's gonna happen sooner than you think. McGuinty has been swimming in murky waters for far too long. 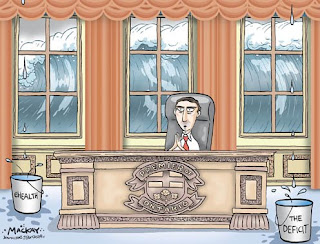 The list of major mismanagements on his watch are too numerous to count. The folly of sinking in billions, especially during a period of recession, for just one among many other such schemes, the light rail proposed on Don Mills Road cutting from North of Steeles to right downtown Toronto is so downright stupid, all one can do is shake one's head and wonder what's going on and when you don't see a valid reason for the light rail at this junction and at this point in time, it's easy to conclude that this is just one of the ways to funnel money to his cronies and the unions. The sensible thing to do would have been to keep a staggered night service going for the TTC rail system, that would have been appreciated by the residents of this city. Corruption with a capital "C" ... that's how the McGuinty dynasty will be remembered.

....Flexing his organizational muscle, Mr. Kennedy managed to get 11 other Toronto-area Liberal MPs - including some whose constituents would benefit from expanded rail service, without suffering the construction headaches - to sign his letter. (New Democrat Cheri DiNovo, who replaced Mr. Kennedy as Parkdale-High Park's provincial representative, continues to raise the issue in the legislature.) If it runs out of other options, Metrolinx may yet appeal to the federal cabinet, which has the ability to overrule the CTA's decision. The irony of the provincial Liberal government asking the federal Conservatives to intervene in a process launched by one of Ontario's most prominent Liberals would be hard to miss.....
via: Bourque       read the whole thing