Africans have the added misfortune of not just being poor but also having a land that does not yield much. Decade after decade there are crop failures all over Africa and that has doubled the number of Africans requiring food assistance. As if that was not enough, then they have the plight of AIDS, civil strifes, corrupt governments and no medicines. I read somewhere recently that almost 40 million poor across the African continent depend on food aid from the rest of the world. With Africa being the foremost region of the world that needs help, how can the Left and the Jew-haters still clamor day in and day out for aid to Palestinians ?? 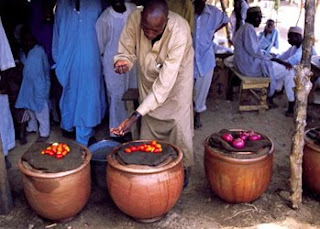 If one looks at the big picture, Palestinians are living like royalty compared to the poor of Africa.

In a region where only a handful of people have fridges, Mohammad Abbas has invented a clay pot system where the water inside the pot acts as an evaporative cooling system and can extend the shelf life of food. Does anybody from the all-knowing Left happen to know how many Palestinian families in Gaza are without fridges? I really and truly want to know as I could not find that info anywhere on the net. 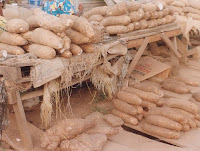 The pic on the right shows the staple food of these poor souls. Yams or other roots on a daily basis... hopefully... because sometimes they don't  get even these roots. 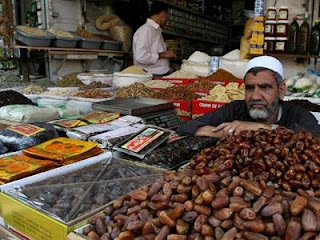 This picture on the left shows the variety of foods available to Palestinians all thanks to the blind Left and the disgusting Jew-haters of the world.

Let's not forget that nutty MP from Britian who organized, along with the usual lovers of Palestine, a convoy of food and other goodies for a people who are already well fed, healthy and wealthy but because of the willful blinders on complacent groups and entire countries, the Palestinian people get a never-ending supply of everything and more without spending a single penny. They spend only on weapons and that's that. Everything else is showered on them in plenty, by the entire world.

How about the dying and starving in Africa? What's that you say ... we don't understand you... get lost. 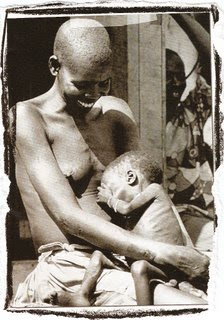 In spite of the suffering and having hardly any possessions to speak of, the people of Africa are largely a peaceful lot. A television set is a rarity in most of Africa, unlike the constant programmes seen in Gaza on Al Jazeera Arabic advocating violence on Israel and infidels and grooming Palestinian children to become suicide bombers.
The hypocrisy of the Left and the Jew-haters and the hypocrisy of the MSM is a thing of beauty - right?!!!