"Raiding Syria" is a bright idea brought to you by warmongering, regime changing ghouls


The powers-that-be are not satisfied enough that Syria is now a broken country. They are still plotting and conniving to oust Assad on the pretext of fighting ISIS/ISIL/IS/xyz by voicing "probably" "maybe" "best method" "strategic vision" "sure way" and all the doublespeak possible that comes from the back holes of these disgusting warmongers and changers of regimes.

Isn't it enough that whatever areas Assad has managed to hold on to will have a largely non-Sunni population or a secular Sunni population and the rest can have their kind of shariah shit from the ISIS/ISIL/IS/xyz that the USA and her allies are responsible for creating?  Do these people still want American taxpayers and probably even Canadian taxpayers (as long as Stephen Harper is at the helm anything and everything stupid is possible) to pay for the additional arming and funding of the "moderate" rebels aka "moderate" jihadis aka ISIS/ISIL/IS/xyz?

You can bet your last dime that that's what the Brookings Institution and the Rand Corporation are advising the powers-that-be to do in Syria. Time will prove me right.

Below a few of the write-ups that give credence to that happening, but only when you pick and choose the real intentions of these degenerates from all the doublespeak they spew out.

Also, make note how the MSM still adamantly insists on calling the jihadis in Syria "the opposition to Assad"  .... are we still so fucking blind to the harm these people are doing to the whole world with their constant lies and doublespeak? How can people keep consuming this shit without waking up at least once in their lifetime to see what's happening around them?  I can clearly see that the USA and her allies want Aleppo to remain in jihadi hands and to that end they will give air cover and arm the jihadis to the teeth .... very, very soon, because from all appearances Assad's forces are gaining ground in Aleppo.  That's a defeat the USA and her minions are not ready for, not as yet.  I don't know why Aleppo is important to the ghouls, probably some oil wells there or prospects for a pipeline ... I don't know.  But their focus is on Aleppo not going back to the Assad regime.

Michael Gordon and Helene Cooper writing at NYTimes:
U.S. General Says Raiding Syria Is Key to Halting ISIS
The Islamic State in Iraq and Syria cannot be defeated unless the United States or its partners take on the Sunni militants in Syria, the chairman of the Joint Chiefs of Staff said Thursday.

“This is an organization that has an apocalyptic end-of-days strategic vision that will eventually have to be defeated,” said the chairman, Gen. Martin E. Dempsey, in his most expansive public remarks on the crisis since American airstrikes began in Iraq. “Can they be defeated without addressing that part of the organization that resides in Syria? The answer is no.”

But General Dempsey and Defense Secretary Chuck Hagel, who both spoke at a Pentagon news conference, gave no indication that President Obama was about to approve airstrikes in Syria.

General Dempsey also was circumspect in describing the sort of broad effort that would be required to roll back ISIS in Syria and Iraq.

“It requires a variety of instruments, only one small part of which is airstrikes,” he said. “I’m not predicting those will occur in Syria, at least not by the United States of America. But it requires the application of all of the tools of national power — diplomatic, economic, information, military.”.......

From CNN:
As ISIS closes in, is it game over for Syria's opposition in Aleppo?
The fate of Syria's Western-backed opposition hangs on a knife edge in the northern part of the war-torn country -- and with radical Sunni militants and regime forces closing in on them from all sides, time may be running out.
At least six villages north of Syria's largest city of Aleppo fell Wednesday to militants from ISIS, according to AFP. The jihadist group has seized large swathes of land in Iraq and consolidated control over considerable territory in northeastern Syria in the past year.
ISIS fighters are now just 30 miles from the rebel-controlled northern suburbs of Aleppo and within striking distance of key opposition positions leading to the Turkish border.
The situation for the opposition may be even worse inside Aleppo city, where forces loyal to President Bashar al-Assad are gaining ground after a brutal months-long campaign against opposition forces.
With the radical Sunni fighters bearing down on them from the north, and troops loyal to President Assad retaking Aleppo neighborhood by neighborhood from the south and west, Syria's beleaguered rebels are facing an existential threat.
Since November 2013, the Syrian government has executed a concerted offensive on opposition-controlled areas of Aleppo city. Intensive and horrifically destructive barrel bombs have flattened the urban environment in which opposition insurgents had thrived, and forced thousands of civilians to flee.......

Tony Cartalucci writing at GlobalResearch has cut through the ghouls' bullshit:
US may attempt to arm and provide air cover for terrorists in Syria after claiming success in fighting ISIS in Iraq using Kurds. 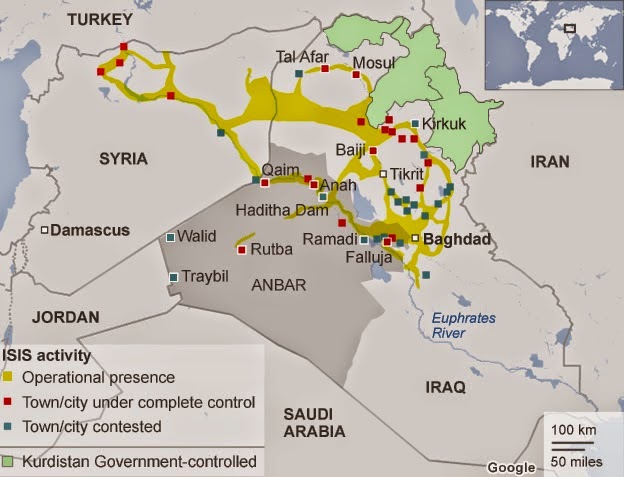 Image: Clearly, ISIS’ path into Iraq began not in Syria, but in NATO member Turkey’s territory. ISIS is nothing more than an extension of the US-backed terrorist forces assembled for the explicit purpose of overthrowing the Syrian government.

As predicted, the “sudden” appearance of the Islamic State in Syria and Iraq (ISIS) in northern Iraq weeks ago, has created the rhetorical framework within which the United States and its regional partners will attempt to militarily intervene in both Iraq and Syria. Token US airstrikes have already been underway in Iraq, and it is now revealed that US special operation forces have been operating in Syria, under the guise of attempting to rescue abducted and now slain American journalist, James Wright Foley.

The New York Times in an article titled, “U.S. Tried to Take Foley and Other Hostages From ISIS,” claimed:
A secret nighttime military mission authorized by President Obama to rescue Americans held captive in Syria failed early this summer when a team of two dozen Delta Force commandos raided an oil refinery in the northern part of the country but found after a firefight with Islamic militants that there were no hostages to be saved, administration officials said Wednesday.

With one American journalist, TIME reporter Steven Sotloff, still missing and allegedly being held by ISIS terrorists, further US military incursions into Syrian territory may be attempted under a similar alleged pretense. To further justify expanding across the border and into Syria already ongoing US military operations in Iraq, the Western media has begun claiming that ISIS leadership, “fearing” US airstrikes, are fleeing to safety in neighboring Syria.
The Wall Street Journal in its article, “Iraqis Say Some Commanders of Insurgency in Iraq Retreat to Syria,” claimed:
According to the Iraqis, the commanders went to eastern Syria, where Islamic State has built an operational base amid the chaos of civil war over the past few years. The insurgents are able to dash across the border into Syria, where that base continues to offer the space to recruit and reorganize largely unchallenged.

“They’ve got much better cover in Syria than they do in Iraq,” said Will McCants, an expert on militant Islam at the Brookings Institution and a former State Department adviser. “When they have that kind of strategic depth, they’re just allowed to live another day.”........

.....Clearly, the answer, left for readers to arrive at on their own, is that these “successful” US airstrikes in Iraq must be carried over into Syria – where mission creep can do the rest, finally dislodging the Syrian government from power after an ongoing proxy war has failed to do so since 2011. After arming and aiding the Kurds in fighting ISIS in Iraq, the US will attempt to make a similar argument regarding the arming of terrorists in Syria and providing them direct US air support to defeat ISIS – and of course – Damascus.