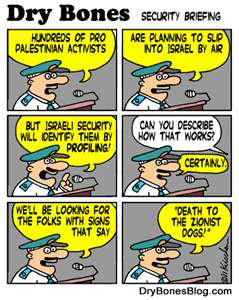 Joke or not, something like this would be a great invention.  And, who better to accomplish that feat than the Israelis !   What a brave new world we are living in now, all thanks to our beloved muslim brothers and sisters.

The Israelis are developing an airport security device that eliminates the privacy concerns that come with full-body scanners..

It's an armoured booth you step into that will not X-ray you, but will detonate any explosive device you may have on your person.

Israel sees this as a win-win situation for everyone, with none of this crap about racial profiling. It will also eliminate the costs of long and expensive trials.

You're in the airport terminal and you hear a muffled explosion.

Shortly thereafter, an announcement:  “Attention to all standby passengers, El Al is proud to announce a seat available on flight 670 to London.   Shalom!”