Silicone cones underneath burkhas is the new "democracy"


Yup,  right !!  Now I get it.  Afghanistan has been democratized but gift-wrapped in yards of blue, black and grey cloth and one of these days ... voilà ...Obama will unwrap another big achievement and declare to the world that he brought Afghanistan into the 21st century just like he unwrapped the Osama Bin Laden hideout which was kept on ice by his crooks for how many months or years is anyone's guess. 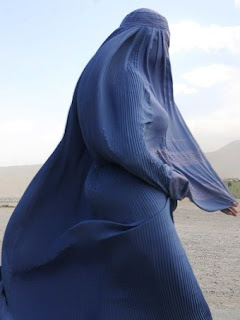 Not long ago the sole focus of Dr Aminullah Hamkar's clinic in Kabul was to repair scars caused by war, acid attacks or attempts at self-immolation by women driven to despair in the male-dominated society.
However with more Afghans travelling outside the country since ousting of the Taliban, Dr Hamkar says women feel pressured into conforming with international ideals of female beauty.

Among the most requested procedures are nose jobs, facelifts and breast enhancements.

"Ten years ago it was all about repairing scars," Dr Hamkar said.
"When I sometimes ask the young people who come here why they want cosmetic operations, they simply say they want to look better and beautiful."
Dr Hamkar says it is a good sign that women, at least among Kabul's growing middle class, are becoming concerned with issues like beauty that are usually reserved for times of peace.
Shaida, who works as a policewoman, sought a nose enlargement after seeing some of her friends and colleagues change the shapes of their noses and eyes.
"I was always jealous to see my sisters and others had longer and bigger noses while my nose was small and flat," the 18-year-old said.
Shaida is from the minority Hazara ethnic group, many of whom have slightly Mongolian looks, with almond eyes and noses that are flatter than those of other Afghans.
"Now that I have a bigger nose, I feel more comfortable and satisfied," she said.....
.
....The girl, from a conservative and insurgency-plagued province in eastern Afghanistan, had married, had children early and had breastfed them.
"Now for me, someone who has worked as a plastic surgeon for years, seeing such cases in other countries was nothing new, but this was something new here in Afghanistan," Dr Hamkar said.
"Her husband travels to a liberal, more open city like Dubai, probably sees beautiful and in-shape women and upon his return home he dislikes his wife's shape and even approves her visiting a plastic surgeon.
"Many people's perceptions of life and sex change upon their return from a trip to a less conservative place."......