In other news .... Ireland legalises abortion


Catholics giving in to pressure .... as usual.  What else is new?
My personal opinion on this is that a woman has every right to choose what she wants done to  her body,  inside or outside.... however, at the same time,  I consider abortion to be nothing but murder.  Preventive measures are the way to go if a woman wants to avoid pregnancy and the resources used to fight both causes ... anti-abortion and pro-choice .... should be used  in developing a drug that would let those women who don't want babies to be barren forever or for  long periods  of time.  The preventive measures used currently are out of date and not radical enough.  Maybe a Muslim scientist can come up with some miracle drug for women to use .... that scientist would do a lot of good for the early takeover of the world by the Caliphate..... as Muslim women carry on making babies non-stop while most others fuck around a lot but remain babyless.

Henry McDonald writing at the Guardian Dublin:
....In a move unthinkable   even a few years ago, the Irish governmentis to introduce legislation permitting abortions in limited circumstances. 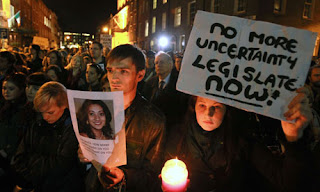 The decision follows pressure from the European court of human rights, which ruled that abortions should be allowed in the republic in cases where a woman's life was at risk.

The taoiseach, Enda Kenny, who represents one of the most traditional rural Catholic constituencies in Ireland, said the Fine Gael-Labour coalition would proceed with a mixture of "legislation with regulation".
The measures would be based on proposals from the so-called Expert Group. The reforms are expected to allow terminations where there is a medical risk to a woman's life or when she is thought to be in danger of killing herself. It is unclear whether the law will allow for terminations in cases of rape or sexual abuse.
In 1992 the Irish supreme court ruled in the case of a 14-year-old girl made pregnant through rape that abortion could be a legal option to someone who was suicidal. Successive Irish governments have failed to implement the ruling, mainly out of fear of upsetting the Catholic hierarchy and religious rightwing pressure groups.....