The lame-stream-media is left limping again ...

by another wallop from Sarah Palin. The  incomplete knowledge on almost all matters, that the LSM seem to possess, gets them in trouble time and time again. Palin loves her country so she researches everything that has made America great ... the socialist media down south does not give two hoots about the USA or it's history, all they want to do is find fault with everything that Palin says. Knuckleheads don't have a clue who they are dealing with when it comes to Palin. 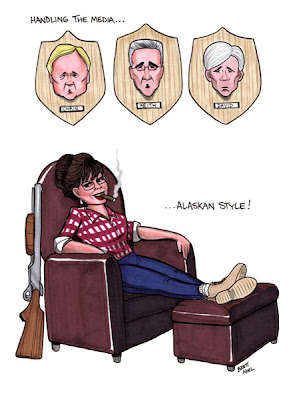 Sarah Palin maintained Sunday that her recollection of Paul Revere’s Midnight Ride was correct,  saying “I didn’t mess up about Paul Revere.”

Appearing on Fox News Sunday at the tail end of her bus tour last week, the former Alaska governor and potential presidential candidate said she was referring to the less well-known part of the story in which Revere is captured by the British and warns them that the Americans are ready for them.

Palin appears to be referring to a part of the story which is not in Henry Wadsworth Longfellow’s poem but is described elsewhere in historical accounts, in which Revere is detained by the British and warns them, while at gunpoint, that 500 American militiamen awaited in Concord.....
Posted by MariaS at 15:16