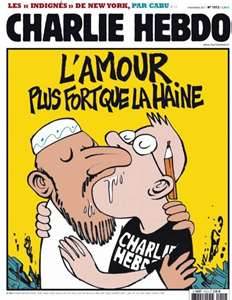 Who says all lefties are appeasers of muzzies?   Obviously, the French lefties are anything but.  They are doing  exactly what America, the nation that's supposed to be "the beacon of freedom on Earth"   should have been doing if Shariah's cancerous rot  had not already started to destroy the Democrats.

Yes .... pouring oil on fire is exactly what's needed to show the world how utterly mad and monstrous the muzzies are and how damned and disgusting is the ideology they have the audacity to call a "religion" and  of "peace" no less.  We have had enough of these illiterates and had more than enough of the appeasers sitting in our governments... waiting for their fat pensions while letting us bear the brunt of their foolishness. 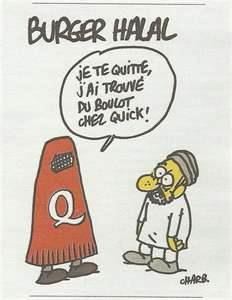 Charlie Hebdo mag makes fun of everybody with the most outrageous cartoons.  Catholics, Jews,  Pro-Choicers, Conservatives, Liberals, Popes, politicians are all lumped together and nothing and nobody  is sacred.... so why should any leeway be given to the muzzies ?????  If you muzzies can't take it, too bad.. let's see more of your loud and ferocious antics so those who had their eyes tightly shut to your eternal tricks will now have no recourse but to pry open their eyes and see your ugly mugs for themselves.

The most logical thing to do would be for all Judeo-Christian nations to close their embassies, schools and all government interests in each and every Muslim country, not just temporarily, but for good.... and start trading with non-Muslim countries ONLY.   Also, put a halt to all muzzie immigration. Yes ... it can be done if only  politicians grow a spine and think of the future of their countries instead of just thinking of a conflict-less career for themselves. 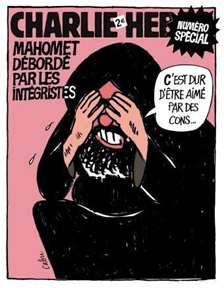 France will close its embassies and schools in around 20 countries    on Friday because of fears of a hostile reaction to a magazine's publication of cartoons of the Prophet Mohammed, its foreign ministry said today.

Laurent Fabius, the foreign minister, earlier announced that he had ordered special security measures "in all the countries where this could pose a problem". 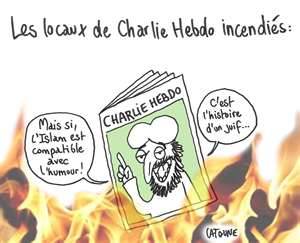 Riot police took up positions outside the Paris offices of a satirical French weekly that published crude caricatures of the Prophet Mohammed today that ridicule the film and the furor surrounding it.
The provocative weekly, Charlie Hebdo, was firebombed last year after it released a special edition that was “guest edited” by the Prophet Mohammed and took aim at radical Islam. The investigation into that attack is still under way.

"In France we have freedom of expression, very well, this principle must not be infringed." But he added, "Is it pertinent, intelligent, in this context to pour oil on the fire? The answer is no," Mr Fabius said on French radio today. 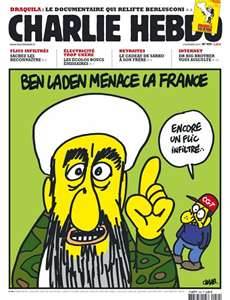 An umbrella group for French Muslims, the CFCM, issued a statement expressing its "deep concern" over the latest Charlie Hebdo caricatures and warned that "in a very tense context, it risks exacerbating tensions and provoking reactions.
"It urged French Muslims to "not cede to provocation and ... express their indignation in peace via legal means."

Meanwhile, Paris is also barring a planned protest over the anti-Islam film The Innocence of Muslims.
Jean-Marc Ayrault, the prime minister, said that organisers of the planned demonstration on Saturday will not receive police authorisation for the protest.

"There's no reason for us to let a conflict that doesn't concern France come into our country. We are a republic that has no intention of being intimidated by anyone," Mr Ayrault said on French radio.