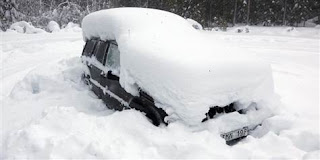 ...Doctors at the hospital said humans would normally be able to survive for about four weeks without food. Besides eating snow, the man probably survived by going into a dormant-like state, physician Stefan Branth told Vasterbottens-Kuriren.

"A bit like a bear that hibernates. Humans can do that," he said. "He probably had a body temperature of around 31 degrees (Celsius) which the body adjusted to. Due to the low temperature, not much energy was used up."...